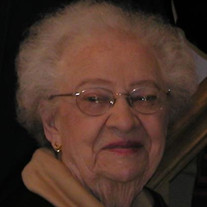 Ruth W. Kane, age 99 of Lynchburg, Virginia (formerly of Johnstown) passed away on Thursday, September 12, 2019 at Heritage Green Assisted Living and Memory Care in Lynchburg. She was born on September 18, 1919 in Scranton, Pennsylvania. Ruth was a 1937 graduate of Johnstown High School. Mrs. Kane was employed for 41 years as a Switchboard Operator and later as an Administrative Assistant at the former General Telephone Company until her retirement. She was of the Lutheran faith, a member of the former Christ Lutheran Church and current Grace Lutheran Church in Johnstown. She is survived by her two sons John T. Kane, Jr. (Janice) of Keller, Texas, and Thomas J. Kane (Joanne) of Lynchburg, Virginia; grandchildren Tricia Kane, Matthew Kane (Erin), and Andrew Kane (Becca); step-grandchildren Eric Brunker (Tory) and Matthew Brunker (Allison); eight great grandchildren; and several nieces and nephews. She was predeceased by her husband John T. Kane, Sr. whom she married on July 1, 1944 and whom passed on October 11, 2005. Funeral services will be conducted at 10:00 a.m. on Saturday, October 26, 2019 at the Grace Lutheran Church, 1 West Montgomery Street, Johnstown. Visitation for family and friends will be on Saturday, October 26, 2019 from 9:00 a.m. to 10:00 a.m. at the Church. Interment will be in St. Patrick’s Cemetery, Johnstown immediately following the funeral service. Contributions in Ruth’s memory may be made to James A. Brennan Memorial Humane Society or Grace Lutheran Church. Arrangements have been entrusted to the A.G. Cole Funeral Home, Inc., 215 E. Main Street, Johnstown. Condolences to the family may be made online by visiting our website at www.agcolefuneralhome.com

The family of Ruth W. Kane created this Life Tributes page to make it easy to share your memories.

Send flowers to the Kane family.