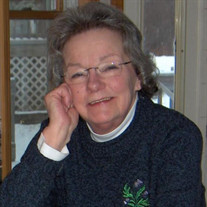 Sharon Bennett Ford Markey, age 78, of Johnstown, passed away at home on Monday April 11, 2022. She was born in Gloversville, NY on June 11, 1943, the daughter of the late Evelyn (Pet-tis) and Gordon W. Bennett. After the passing of her mother while she was a toddler, Sharon was adopted and lovingly raised by Olga (Clark) and R. Stanley Bennett of Mayfield. In 1959 she married James D. Ford of Delhi, OK. They shared 27 years of marriage until James’ passing in 1986. In 1991 Sharon married Arthur R. Markey of Northville, NY. They shared 21 years to-gether until his passing in 2012. Sharon is survived by a son, James Ford (Kirsten) of Huesby, Germany; and a daughter, Jessica Ford (James Schlesier) of Johnstown, NY; 3 step-children, Ellen Linza of Aldie, VA; Gretchen Markey of Northville, NY; and Sean (Judith) Markey of Peacham, VT with their chil-dren; 5 grandchildren, Angela Huckaby, Benjamin Huckaby, Daniel Town, Emily Smrtic and Madison Smrtic; as well as several great-grandchildren. She was predeceased by her daughter, Jennifer Ford Town Huckaby in 1994; and several siblings including her beloved sister Audrey Wemple in 2019. She is also survived by her lifelong friend, Shirley Kuhn of Johnstown. Sharon loved social gatherings and was always up for a party, be it family or formal occasions, and loved spending time at the regional casino slots, looking for that next jackpot. She was proud of her Bennett-family heritage, as the family was part of the development of the glove industry in the region. At a young age she was active in local politics as an elections inspector and a mem-ber of the Young Republicans Club. Her marriage to James took her away from Mayfield to many locations, as he worked as a geological engineer. They moved 32 times during their early married years, living in Maryland where Jennifer was born, as well as northern California,–- where Jimmy was born. They once were sent to live in Alaska where she worked at “Caribou’s Department Store” in Anchorage, famous for having the first escalator in the state. Their adventures took them to Corpus Christi and San Antonio, TX; Craig, CO; Ely and Elko, NV where Sharon dealt blackjack in the casinos; and Waycross, GA, until they finally settled back to her childhood home in Mayfield, where Jes-sica was born. She worked her way to shop steward at Coleco Industries in Mayfield and was employed at Nichols Department Store in Gloversville in the 1970s. She fancied herself on the big stage and realized this dream by playing many leading characters with the Mayfield Community Players as well as Colonial Little Theater and the Gal-way Players. She made many close friends during these most joyful times. She was an accomplished pianist and organist, and served for many years at the May-field Methodist Church. She was an active member of the Auxiliary of the Marine Corps League Adirondack Detachment 787 in Mayfield. She worked as a real estate agent, and then in her later years found a calling as a cus-tomer relations specialist at the Saratoga, NY, Casino and Raceway, where she was beloved by colleagues and customers alike. Twice she was honored with Employee of the Year awards from that organization. She retired from there in 2017. There will be no calling hours or funeral services. In July, Sharon will be interred at the Gerald B.H. Solomon Saratoga National Cemetery next to her beloved husband Art, who was a Marine veteran of the Korean War and Chosin Reservoir campaign. A celebration of her life will be held at that time. In the meantime, friends— raise a glass of sangria to toast her life! In lieu of flowers, contributions may be made to the Marine Corps League Adirondack Detach-ment 787, 4 Lark St., Gloversville, NY 12078; or to the James Brennan Humane Society of Ful-ton County, 437 Nine Mile Tree Road, Gloversville, NY. 12078. Arrangements have been entrusted to the A.G. Cole Funeral Home, Inc., 215 E. Main Street, Johnstown. Condolences to the family may be made online by visiting our website at www.agcolefuneralhome.com

Sharon Bennett Ford Markey, age 78, of Johnstown, passed away at home on Monday April 11, 2022. She was born in Gloversville, NY on June 11, 1943, the daughter of the late Evelyn (Pet-tis) and Gordon W. Bennett. After the passing of her mother... View Obituary & Service Information

The family of Sharon Markey created this Life Tributes page to make it easy to share your memories.

Send flowers to the Markey family.