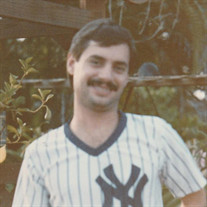 Stephen Lee Bromford, 65, of Johnstown, passed away on Thursday, September 3, 2020 after a long illness. He was born June 27, 1955, son of Margaret E. Bromford and James J. Bromford and raised in Canajoharie, NY. He was a graduate of Canajoharie Central School. He was a cross country runner and one of the first members of the swimming team. Stephen was a member of the Church of the Good Shepherd and was a loyal acolyte throughout his high school years. Stephen graduated from Paul Smith’s College in 1975 with an Associate’s Degree in Applied Science. He majored in Terminal Hotel Management. He was president of Tau Kappa Beta Fraternity. Stephen’s parents bought the Outlet Restaurant in Caroga Lake and Stephen organized the new business and was the chef. The specialties of the house were “Steak for Two, Crab Legs and Stuffed Shrimp.” When his father sold the business for health reasons, Stephen moved to Florida. Stephen worked for a variety of establishments in Florida, including the ones with valet parking. Steak and Ale was one of them. He was chosen to be in charge of two new store openings, one in Texas and one in Florida. In 1990, Stephen returned to New York State and started a new career as Executive Chef at the Holiday Inn in Johnstown. Stephen met many wonderful people and helped them celebrate their most important occasions. Due to his ill health, he retired in 2019. Stephen was a cat lover and owned many high bred cats. His present cat Remy, is a beautiful ragdoll. He was a baseball and basketball fan. The Yankees were his favorite. He liked music and collected CDs. Stephen is survived by his mother, Margaret Bromford, his son Ryan Bromford, his cousins, Patrick Buhrmaster, Timothy Buhrmaster, Betty White, and Bob Weller. Stephen was predeceased by his father, James Bromford. While practicing social distancing and wearing a mask, the family will receive relatives and friends Saturday, September 12, 2020 from 1:30 p.m. to 2:30 p.m. with a service to follow at the A.G. Cole Funeral Home, Inc., 215 E. Main Street, Johnstown, NY. Burial will follow at the Evergreen Cemetery, Fonda, NY. Memorial contributions in Stephen’s memory may be made to the Church of the Good Shepherd, 26 Moyer Street, P.O. Box 118, Canajoharie, New York 13317. Condolences to the family may be made online by visiting our website at www.agcolefuneralhome.com

Stephen Lee Bromford, 65, of Johnstown, passed away on Thursday, September 3, 2020 after a long illness. He was born June 27, 1955, son of Margaret E. Bromford and James J. Bromford and raised in Canajoharie, NY. He was a graduate of Canajoharie... View Obituary & Service Information

The family of Stephen L. Bromford created this Life Tributes page to make it easy to share your memories.

Stephen Lee Bromford, 65, of Johnstown, passed away on Thursday,...

Send flowers to the Bromford family.