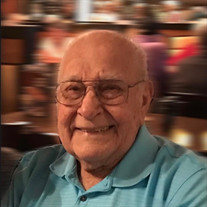 Steve J. Otruba, 88, of Johnstown, passed away on Saturday, December 19, 2020 at St. Mary’s Hospital, Amsterdam with his family at his side. He was born February 18, 1932 in Richeyville, Pennsylvania, the son of the late Steve and Marie Lesko Otruba. Steve was a 1950 graduate of Johnstown High School. He proudly served his Country in the United States Air Force during the Korean War from 1951 to 1955. Mr. Otruba was employed as an engineer with G.T.E and Contel for 42 Years until his retirement. He was a member of the former St. Anthony’s Church and Holy Trinity Parish in Johnstown. He was also a member of the Nick Stoner Golf League for over 30 years and a member of Water Oak Country Club in Lady Lake, Florida and also was a member of the Johnstown Moose. He played in the YMCA travel volleyball league for many years. Steve also bowled in the Enterprise league for over 25 years at the Johnstown Bowling Center. On May 17, 1958, he was united in marriage to RoseMarie Hladik Otruba and she passed away on December 27, 1996. Survivors include two sons Stephen Otruba and James Otruba; two daughters Arlene (Bruce) Wiekierak and Teri (John) Brandt; two brothers Emery Otruba and John Otruba; two brothers-in-law William Knuffke and Edward Testerman; two sisters-in-law Irene Manno and Katherine Hladik; two grandchildren Lindsay Brandt and Logan Brandt; nieces, nephews and cousins. In addition to his wife and parents he was predeceased by one brother William Otruba, one sister Paula Perry. Visitation for family and friends will be on Tuesday December 22, 2020 from 10:00 a.m. until 11:00 a.m. at the A.G. Cole Funeral Home, Inc. 215 East Main Street, Johnstown. Funeral services will follow the visitation at 11:00 a.m. at the funeral home. Spring burial will be in St. Anthony’s Cemetery, Johnstown. Steve’s family would like to express their gratitude to the Doctors and Staff of the fourth floor of St. Mary’s Hospital for their care, compassion and professionalism. In lieu of flowers, contributions in his memory may be made to Community Hospice of Amsterdam. Condolences may be made to the family at www.agcolefuneralhome.com

Steve J. Otruba, 88, of Johnstown, passed away on Saturday, December 19, 2020 at St. Mary&#8217;s Hospital, Amsterdam with his family at his side. He was born February 18, 1932 in Richeyville, Pennsylvania, the son of the late Steve and Marie... View Obituary & Service Information

The family of Steve J. Otruba created this Life Tributes page to make it easy to share your memories.

Steve J. Otruba, 88, of Johnstown, passed away on Saturday, December...

Send flowers to the Otruba family.