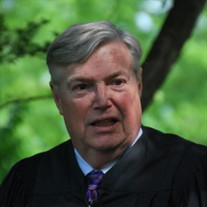 Honorable Thomas C. Walsh, 73, of Johnstown, passed away on Monday, November 16, 2020 at St. Mary’s Health Care, Amsterdam. He was born July 3, 1947 in Amsterdam, a son of the late Carrol S. Walsh, Jr. and Dorothy Doust Walsh, who survives. Tom was a graduate of Bishop Burke High School in 1965. He received his Bachelor Degree from Siena College and his Juris Doctorate Degree from Albany Law School. He was employed as an attorney in Johnstown; he also served as the Johnstown City Court Judge until he retired. Mr. Walsh was a member of the Johnstown Council 239 Knights of Columbus. Served on the Johnstown Public Library Board for over 40 years, The Johnstown Hospital Board, Board of Directors of the Johnstown YMCA and also served as president, President of the Johnstown League Baseball, and also the Johnstown Jaycees. Mr. Walsh was an avid golfer and was a member of Pine Brook Golf Course. Tom traveled the world to golf including St. Andrew’s in Scotland, The Home of Golf. Survivors in addition to his mother Dorothy include his wife Denise Quinn Walsh whom he married on August 2, 1969; his son Michael P. Walsh and his wife Katie; two daughters Kathleen Mitchell and her husband John and their son Jack Mitchell, Colleen Prostor and husband Stephen and their children Aidan and Cailin Prostor; one Brother Terrance Walsh and his wife Rosemary; two sisters Sharon Salluzzo and husband Ronald and Elizabeth Connolly; also nieces, nephews and cousins survive. Visitation for family and friends will be held on Saturday, November 21, 2020 from 9:30 A.M. to 11:00 A.M. at Holy Trinity Church, Glebe Street, Johnstown, followed by a private Mass of Christian Burial. Burial will be in St. Patrick’s Cemetery, Johnstown. In lieu of flowers contributions in his memory may be made to the Johnstown Public Library or to the Family Counseling Center of Fulton County. Arrangements have been entrusted to the Barter & Donnan Funeral Home, 1 N. Melcher Street, Johnstown. Condolences may be made to the family at www.agcolefuneralhome.com

The family of Hon. Thomas C. Walsh created this Life Tributes page to make it easy to share your memories.

Honorable Thomas C. Walsh, 73, of Johnstown, passed away on Monday,...

Send flowers to the Walsh family.