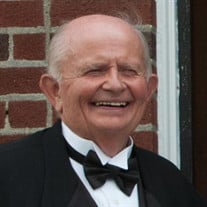 Vincent Lewis Chadwick, 81, of Johnstown, passed away on Monday, April 27, 2020 at his residence. He was born on October 7, 1938 in the Village of Granville, a son of the late Floyd H. Chadwick and Elizabeth McDonough Chadwick. Vincent was a graduate of Granville Central School and received his bachelor’s and master’s degrees from Siena College. He started his teaching career at Milford Central School where he met his wife, Sue. Vincent then began his tenure at the Greater Amsterdam School District where he taught History for many decades until his retirement in 1995. Mr. Chadwick was also employed as a Salesman at Livingston's Furniture for over 30 years. Vincent was of the Catholic faith. He was the President of the Montgomery County Teachers Federal Credit Union, a member of the New York State United Teachers and a member of the Montgomery County Retired Teachers Association. He also served as Treasurer of the Fulton County Historical Society. Vincent was a beloved husband, father, grandfather, and brother. He enjoyed travel, especially cruises and annual trips to Florida with Sue, reading, history and exploring historic places with his family. He was a big fan of the Boston Red Sox, relishing the three championships and seeing the trophies as a member of the National Baseball Hall of Fame. From his days with his parents and brothers, then his wife and daughters, and later his grandchildren, Vincent (“Pop Pop” to the grandchildren) loved every moment at his camp on Hills Pond in Hampton, New York. He is survived by his wife Sue Murray Chadwick of Johnstown, whom he married on November 28, 1969; two daughters, Jennifer McDowell and her husband Eric of Colonie and Colleen Nesbit and her husband Gregory of Bennington, Vermont; his brother, Brian Chadwick and his wife Kelly of Rochester; three grandchildren, Sara, Colin and Ryan and several nieces, nephews and cousins. In addition to his parents, Vincent was predeceased by his brother, Brendan Chadwick. Private services will be conducted at the convenience of his family. Interment will be in the Old Stone Fort Cemetery, Schoharie. Contributions in Vincent’s memory may be made to the Johnstown Public Library, 38 S. Market Street, Johnstown, New York 12095, Fulton County Historical Society and Museum, 237 Kingsboro Avenue, Gloversville, NY 12078 or to the Southern Poverty Law Center, 400 Washington Avenue Montgomery, AL 36104. Arrangements have been entrusted to the A.G. Cole Funeral Home, Inc., 215 E. Main Street, Johnstown. Condolences to the family may be made online by visiting our website at www.agcolefuneralhome.com.

Vincent Lewis Chadwick, 81, of Johnstown, passed away on Monday, April 27, 2020 at his residence. He was born on October 7, 1938 in the Village of Granville, a son of the late Floyd H. Chadwick and Elizabeth McDonough Chadwick. Vincent was... View Obituary & Service Information

The family of Vincent Lewis Chadwick created this Life Tributes page to make it easy to share your memories.

Vincent Lewis Chadwick, 81, of Johnstown, passed away on Monday,...

Send flowers to the Chadwick family.