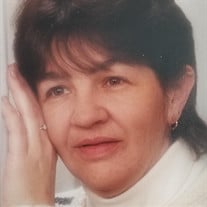 Virginia H. “Ginny” Cameron, age 64, of Gloversville, passed away on Wednesday, April 3, 2019 at St. Mary’s Hospital, Amsterdam surrounded by her loving family. She was born on May 12, 1954 in Gloversville, a daughter of the late Stanley Henderson and Florence James Henderson. Ginny was employed for over 35 years as a Pricing Coordinator for the Golub Corporation in Schenectady. She was a member of the Johnstown Moose. She is survived by her husband Kenneth Cameron whom she married on August 14, 2004, one son Kenny Cameron; four daughters Jade Chase (Jon) of Johnstown, Paulette Desrochers (Andy) of Perth, Jody Cameron (Myrt) of Chestertown and Susan Roberts of Richfield, one brother Edward Henderson (Tracy) of Gloversville; two sisters Linda Morley (Michael) of Johnstown and Mary McSpirit-Horning (David) of Gloversville; grandchildren Nicole, Robert, Cameron, Landen, Jonathan, Gabrielle and Kira and several nieces, nephews and cousins. In addition to her parents, Ginny was predeceased by one brother Stephen A. Henderson whom passed in 2001 and one sister Brenda Foster who passed in 2016. Memorial services will be conducted at 4:00 p.m. on Sunday, April 7, 2019 at the Barter & Donnan Funeral Home, 1 N. Melcher Street, Johnstown with Rev. David Almleaf officiating. Memorial visitation for family and friends will be prior to the service on Sunday, April 7, 2019 from 1:00 p.m. to 4:00 p.m. at the funeral home. Contributions in Ginny’s memory may made to the National Kidney Foundation online at https://www.kidney.org/support Condolences to the family may be made online by visiting our website at www.barterdonnan.com

The family of Virginia H. Cameron created this Life Tributes page to make it easy to share your memories.

Send flowers to the Cameron family.