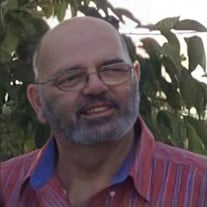 It is with heavy heart and great sadness that I tell you of the passing of my father, Wayne E. Putman. Wayne was born in Amsterdam on December 2, 1952, to Clyde D. Putman and Betty (Stroebeck) Putman. He was raised in Gloversville, NY, and attended and graduated from Gloversville High School, class of 1971. After graduation, he was employed by General electric, N.A. Taylor Company and also worked as an on-call staff member for Tryon Juvenile Residential Facility. Wayne enjoyed a number of activities throughout his life, attending Fonda Speedway and cheering on his favorite driver, the orange 12A of Jack Johnson, he played softball for several teams in Fulton County and bowled with the Tuesday Night Space League at Perry Lanes and the Fonda Men’s League at the Johnstown Bowling Center. Beyond Wayne’s activities, he was also an avid Giants and Yankees fan. Wayne had a lot of love for everyone, but most of all were his love for his grandsons. He attended their sports events and little league games, he never missed one, even though there are four grandsons. There was never a play missed or a referee or umpire call that didn’t hear him when a bad call may have been made. Wayne had a quiet, laidback personality, but you never had to guess how loyal he was to his friends and family. No matter what obstacles Wayne faced, he put his family first. Wayne is survived by his son, Christopher Wayne Putman (Kelly) of Beulaville, NC; four grandsons, Brady, Keegan, Quinn, and Sullavan; brothers, William Ptuman (Wendy) of Laurel, MD, and Wade Putman of Johnstown; sister, Susan Brooker (Gerald) of Amsterdam; ex wife, Amy Baker (Chris’ Mom); as well as nieces and nephews, Melissa Richardson, Erica Putman, Tiffany Kavalsky, Brandy Heller, Anne Marie Granati, Michael Putman, Bill Putman, Jay Putman, Jadelynn Putman, Chris Cole; and many, many great nieces and nephews that he loved and adored. There will be no calling hours or funeral services as per Wayne’s request. Cremation will take place and a memorial celebration will take place at the convenience of the family. Arrangements have been entrusted to the A.G. Cole Funeral Home, Inc., 215 E. Main Street, Johnstown NY. Condolences to the family may be made online by visiting our website at www.agcolefuneralhome.com

It is with heavy heart and great sadness that I tell you of the passing of my father, Wayne E. Putman. Wayne was born in Amsterdam on December 2, 1952, to Clyde D. Putman and Betty (Stroebeck) Putman. He was raised in Gloversville, NY, and... View Obituary & Service Information

The family of Wayne Putman created this Life Tributes page to make it easy to share your memories.

It is with heavy heart and great sadness that I tell you of the...

Send flowers to the Putman family.