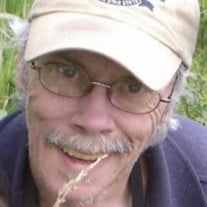 William “Bill” Gotobed, age 64, of Johnstown, passed away Wednesday, January 19, 2022, at home after a long illness. Born on June 10, 1957, in Amsterdam, NY, he was a son to the late Harold and Mary (Going) Gotobed. Bill grew up in Fonda and later moved to Johnstown where he has resided for over 30 years with his wife, Judith. He was known by many, and it was hard to go anywhere and not run into someone he knew. He most recently worked for Lexington Center for nearly 20 years. In his free time, he almost certainly would be found any place he could cast a fishing pole, whether it was at a small farm pond, the Sacandaga Lake, or the Schoharie creek. Bill was never far from his love of fishing. He is also known for his storytelling skills. Bill also spent many years as an active member of the local pool league. He had a passion for scroll saw art woodworking and spent many hours in his wood shop creating all kind of things. He is remembered as very handy, hard-working, and always busy with something. He is survived by his wife, Judith to whom he married on June 10 of 1979; four children; Katherine Gotobed (Jesse), Emily Gotobed (Harold), William Gotobed (Danielle) and Holly Ahrens (Brandon). Bill was known as Poppy to his nine grandchildren, Adriana, Jaiden, Harold, Geoffrey, Connor, Ivelisse, Holden, Teagan, and Reese. Bill absolutely loved being a Poppy to all his grandchildren. He also leaves behind his brother, Harold Gotobed (Nancy) and sister, Diane Gotobed Collins. In addition to his parents, Bill is predeceased by his brothers, Bruce and Wayne; sister, Sandra. At the request of his loved ones, they would like Bill to be remembered as a good man who loved his family and friends unconditionally. A celebration of life for all of Bill’s family and friends will be held Saturday, February 5, 2022, from 1:00 PM until 4:00 PM at The Johnstown Moose Family Center, 109 S. Comrie Avenue, Johnstown, NY. In lieu of flowers, memorial contributions in Bill’s memory may be made to the Mountain valley Hospice, 108 Steele Avenue, Gloversville, NY. Arrangements have been entrusted to the A.G. Cole Funeral Home, Inc., 215 E. Main Street, Johnstown NY. Condolences to the family may be made online by visiting our website at www.agcolefuneralhome.com

The family of William "Bill" Gotobed created this Life Tributes page to make it easy to share your memories.

Send flowers to the Gotobed family.