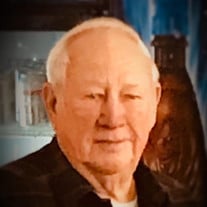 It is with great sadness I have to announce the passing of a great man, William H. Smith of Johnstown who passed unexpectedly doing what he loved, by a freak accident with his backhoe on Wednesday Dec. 11, 2019. Born in Stone Arabia on Sept 3, 1937 to William C Smith and Eva J. Gran. He was a lifelong member of the Johnstown area. He was predeceased by the love of his life Charlene E. Morse, whom he affectionately always called “Charn”. He and Char were wed on September 3, 1960, and shared 53 years of marriage together enjoying go-kart racing together at the Meco track using the number 33, snowmobile riding on the poker runs, camping, 4 wheeler races, stockcar races, NASCAR and just about any event that had motors and racing. They were inseparable, always doing things together, where one was, the other wasn’t far behind. They had 2 children, Lynn (Joe) Buono and Billy “The Kid” Smith along with one grandson who they were devoted to and raised, Eric William Smith. His faithful 4 legged companion “Merlin” who went on rides ate ice cream together and was always by his side. Bill is survived by his sister Elaine Scutt and brother Albert J. Hayes. He was predeceased by his sister Madeline McCue, Leonard Smith and Russell Hayes. He is survived by his brothers in law Pete Morse and Carlton Scutt and sisters in law, Jerinne Spraker and Marilyn Palmateer, along with several nieces, nephews and many family and friends. Dad was tough on us growing up, he pushed us to be the best we could be, not the best, but our best. He was proud of all 3 of us. He was affectionately known to all as “Hump”. He was a second father and grandpa to most of you. He was great friend to many and was always willing to lend a hand anytime anyone needed it. He was truly one of a kind. He was a proud member of Laborers’ Local 157, Schenectady NY where he just received his 50 year membership award on Tuesday. He worked for Paving Contractors Company, then for Callanan Industries Inc. as a paving foreman where he was C-29 on the company radio. Callanan people were his extended family. He was a teacher, “teaching things the old school way” a dedicated hard working man. He had many friends in Callanan and lots of great memories and stories. Hump was known for his “Garage”. Every Sunday he would look forward to Jimmy McMillan coming down to help him fix something and just tinker around, usually working on the backhoe. He couldn’t sit still, always busy. After that they would go to the garage and watch the NASCAR race with “Cook” Ron Cook- who was a lifelong friend and brother-in-law along with the rest of the gang that popped in to the garage. There are too many people, to mention, whose lives have been touched by this great man, but it wouldn’t be fair if I didn’t mention Leonard Bennett and George Jacobs who were his lifelong friends. The garage was a gathering place for people to just hang out and enjoy each other’s company along with all the ball busting that went on. Wednesday was card day; Thursday was “Thirsty Thursdays” when the NASCAR numbers were drawn. Friday & Saturdays you could always find him out with his two friends Lori & Sue, they were the 3 amigos, who kept him going after mom passed, so he wasn’t home alone. I could go on and on, but I won’t. He was the President of the “Mid-Nite Movers Snowmobile Club” Where the saying was “Shut up and ride Sally”. He was a member of the Johnstown Moose and belonged to their pitch league, a member of the Concordia Club, The Bleecker Fish and Game Club; he also played cards at Doc’s on Mondays. If you truly want to know about this fantastic friend to all, get on Face book and read all the comments. We’re going to miss you Dad, grandpa & Hump - Until we meet again, I can find comfort knowing you’re with mom again and you left us doing something you loved. We will treasure your memories forever, we all love you. Now go and “Park it Goddamn it” and I think we all will have “Just one more beer” toasting to the great life you had and shared with us. In lieu of flowers, donations can be made to the Nancy B. Clemente Cancer Fund, 369 Brunswick Rd. Troy NY 12180 or The American Heart Association. Funeral services for friends and family will be on Monday December 16, 2019 at 1:00 PM at the A.G. Cole Funeral Home, 215 East Main Street, Johnstown. Visitation will be prior to the service on Monday from 10:00 AM until 1:00Pm at the funeral home. Interment will be in Fern Dale Cemetery, Johnstown. Hump was a simple man, so please free to wear jeans and work boots, just casual clothes. Condolences can be made online by visiting our website at www.agcolefuneralhome.com

It is with great sadness I have to announce the passing of a great man, William H. Smith of Johnstown who passed unexpectedly doing what he loved, by a freak accident with his backhoe on Wednesday Dec. 11, 2019. Born in Stone Arabia on Sept... View Obituary & Service Information

The family of William H Smith created this Life Tributes page to make it easy to share your memories.

It is with great sadness I have to announce the passing of a...

Send flowers to the Smith family.